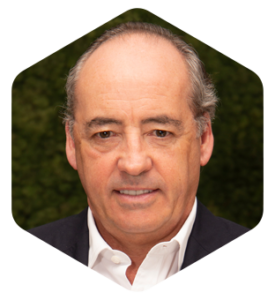 Pablo Juantegui has a Degree in Economics from the CUNEF Business Administration and an MBA from the Instituto de Empresa where he was top of his class. He began his career in different management positions in companies such as the American Coors Brewing Company, the confectionery and food manufacturers Mars Inc. and the IBM computer giant. In 1998, he was appointed General Manager of the Gonzalez Byass wine and spirits company. In 2001, he became the first executive of Telefónica Publicidad e Información (TPI). In 2004 he was appointed CEO of the Sanitas Group. In the four years under Juantegui’s management, Sanitas Seguros doubled their net profit (from € 41 million in 2003 to € 89 million in 2007) and increased their customer base from 1.36 to 1.87 million. In 2008, he was appointed Managing Director of International Businesses for Europe, the Middle East, Africa (EMEA) and Latin America, of the Bupa Group.Since November 2009 he has been the CEO of Telepizza and in 2016 he was also named Chairman of the company; the Spanish multinational leader in ready prepared, home-delivered food service in Europe and fourth worldwide. Founded in 1987, Telepizza is a pioneer in the home-delivered food service in Spain and has established itself as the restaurant company with the highest number of points of sale and the best geographical coverage. Telepizza has already exported its business model to 23 countries, including Portugal, Chile, Colombia, Peru, Ecuador, Bolivia, Panama, the Arab Emirates, Russia and Angola. The company currently has 1,607 points of sale and 25,000 employees throughout the world. The company currently has 1,607 points of sale and 25,000 employees throughout the world. In addition, following their agreement with Pizza Hut, the company will position itself as a world-leading pizza operator that is present in 37 countries and managing 2,560 stores.